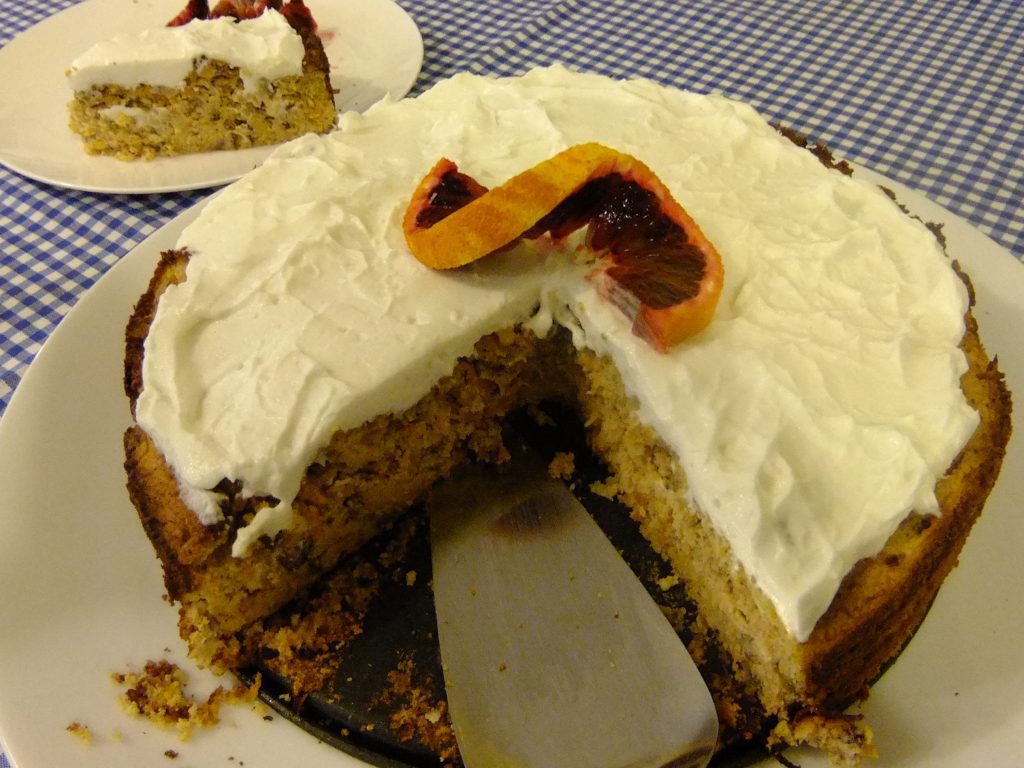 I have to admit I was dubious about making this cake because it contains no grains.  I couldn’t believe it could be as nice as the wheaty carrot cake I used to make before I learned I was coeliac.  But this one is lovely and moist and not as fiddly to make.  The icing is phenomenal whether you go for the dairy-free or the dairy-laden option.  I’ve adapted the recipe slightly from the one on “Wheat Belly” by cardiologist William Davis.  He writes about why humans are totally unsuited to eating gluten and how you can enhance your health by cutting grains.  The original recipe uses double the sweetener for the cake, but I found that a bit sickly.  If you (or your kids) have a massive sweet tooth though, feel free to double it…

Icing (vegan or standard cheese base):
1 tbs lemon juice or home made kefir
1 tbs xylitol/erythritol (or more, to taste, if you want it sweeter)
200g plain Coyo (dairy-free yoghurt) for dairy-free/paleo diets OR ricotta cheese if you want to eat dairy

*If you don’t use organic oranges, there will be pesticide residues on the peel.  So put your oranges into a litre of water, add 2 tbs vinegar and leave for at least 20 minutes before scrubbing well (to remove the chemicals).  This trick also works for cleaning vegetables (leafy greens can just be soaked and washed off after).

1. Preheat oven to 170C (155C fan) and grease the baking tin with coconut oil.
2. To make the cake: combine the coconut flour, erythritol, xylitol, orange zest, ground flaxseed, cinnamon, allspice, nutmeg, baking powder and salt in a large bowl and mix by hand.
3. Beat together the eggs, gently melted (just hand hot) coconut oil, yoghurt or kefir, coconut milk and vanilla in a medium bowl.  Pour the egg mixture into the coconut flour mixture.  Using an electric mixer, beat until thoroughly mixed.  Stir in the carrots and pecans by hand.  Pour the mixture into the baking tin.
4. Bake for around 1 hour checking after 45 mins.  When a toothpick/skewer inserted into the cake comes out clean it’s done.  You want the cake to remain moist.  Much better slightly undercooked than over, I promise!
5. To make the icing: combine the Coyo or ricotta with the lemon juice and xylitol in a bowl and beat until smooth.  If you’re making the kefir cheese based icing omit the lemon juice and optionally add the zest of a lemon.
6. Spread the icing over the top of the cooled cake.

Why this cake is better for you:
As you probably know any food that’s cooked above 100c generates toxic by-products (though less so if you don’t use sugar or polyunsaturated oils).   That’s why a raw or just gently cooked diet (nothing above 100c) helps keep you younger longer, lowers inflammation and generally helps your body.  That said, who doesn’t occasionally want something like a cake?  This one is ideal as it’s grain free and protein rich.  This means it doesn’t cause the fluctuations in blood sugar that fuel inflammation and can trigger skin issues, fatigue or dips in brain function.  Coconut, unlike most oils, is still good for you even when it’s been heated.  Roll on full-fat coconut milk! The low fat stuff is filled with emulsifiers and lacks the good stuff.  Xylitol is what’s called a sugar alcohol and is 1.6 times as sweet as sugar but with half the calories.  It’s not absorbed by your body so it doesn’t affect blood sugar levels.  It’s generally deemed to be safe.  If you have a very sensitive bowel, go cautiously with xylitol because it can be hard for some people to deal with in large quantities.  Guideline: just a slice, and not the whole cake in one sitting!
If you use Coyo yoghurt (or kefir) in the icing, you will also be getting a boost of friendly bacteria in this delicious cake to boost vitality and wellbeing.