If you have any unexplained pain, change in bowel habit or have black/tarry stools you need to consult your medical practitioner immediately.

Inflammatory bowel disease (IBD) such as Crohn’s or ulcerative colitis, involves inflammation of the digestive tract. IBD is a serious condition and needs ongoing medical supervision alongside any natural therapies aimed at helping your body to heal itself.

In IBD the body’s immune system actually attacks itself (it is an auto-immune condition) and the causes are many. Inflammatory bowel disease is rare in cultures where people eat a natural wholefood diet. We also know that there is a higher incidence of IBD in people who eat low fibre diets, smoke, eat fast foods or eat a lot of sugar. A study published in the Americal Journal of Gastroenterology found that low consumption of essential fatty acids, vegetables and fruits were associated with risk for Crohn’s disease1.

The following are issues you will probably need to explore if you want to reduce the number and severity of flare-ups of Crohn’s and ulcerative colitis: 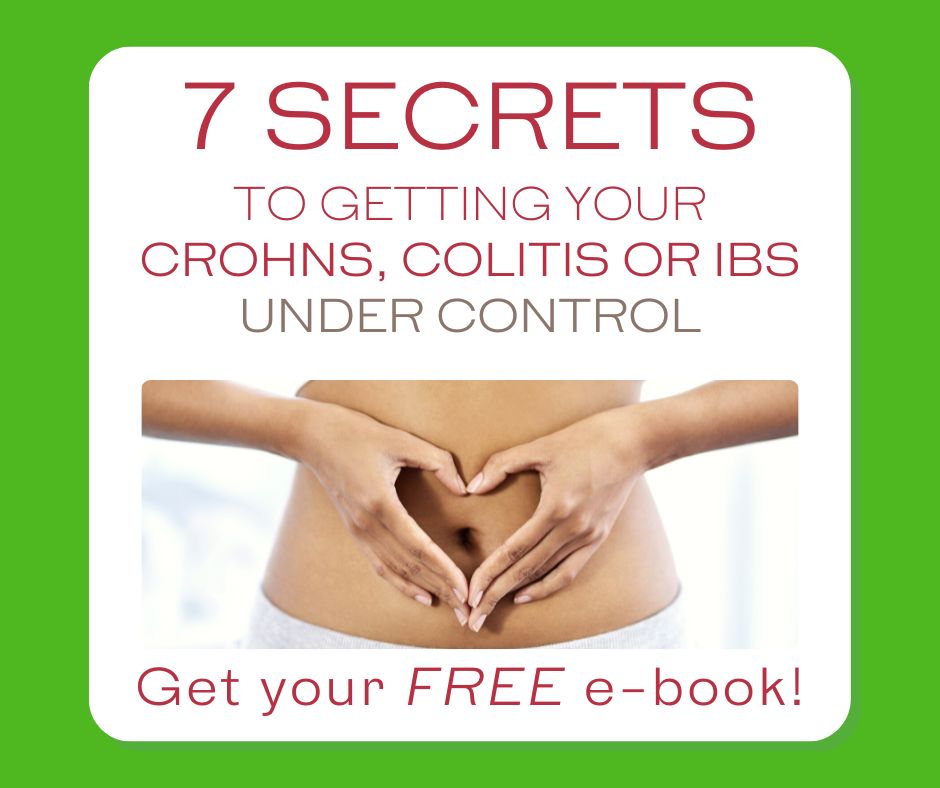 Fill in your details below to receive your FREE e-book

Do you have coeliac disease/non-coeliac gluten sensitivity?

Coeliac disease is a genetic condition that affects many Irish people. Most people are not diagnosed (if ever) until after age 50 and a lifetime of ill health. Standard tests available throughout Europe can definitively diagnose Coeliac Disease BUT cannot rule it out*. This is because biopsy only shows coeliac disease when the gut surface is almost completely destroyed (which might take many decades) and a negative blood test does not guarantee you are not coeliac. The only definitive way to know if you are gluten sensitive is to do sophisticated blood tests or to remove it COMPLETELY from the diet for a period of time. When doing an elimination, even tiny traces of gluten will skew your results so it is crucial to do the elimination 100% for the test period.  For some years now I have been able to organize comprehensive and reliable gluten sensitivity testing from Cyrex Laboratories for patients and non-patients alike.

If you’d like to book a FREE quarter hour phone consultation send an email to anna@annacollins.ie or ring 087 981 6666 now and we’ll organize a time that suits you.