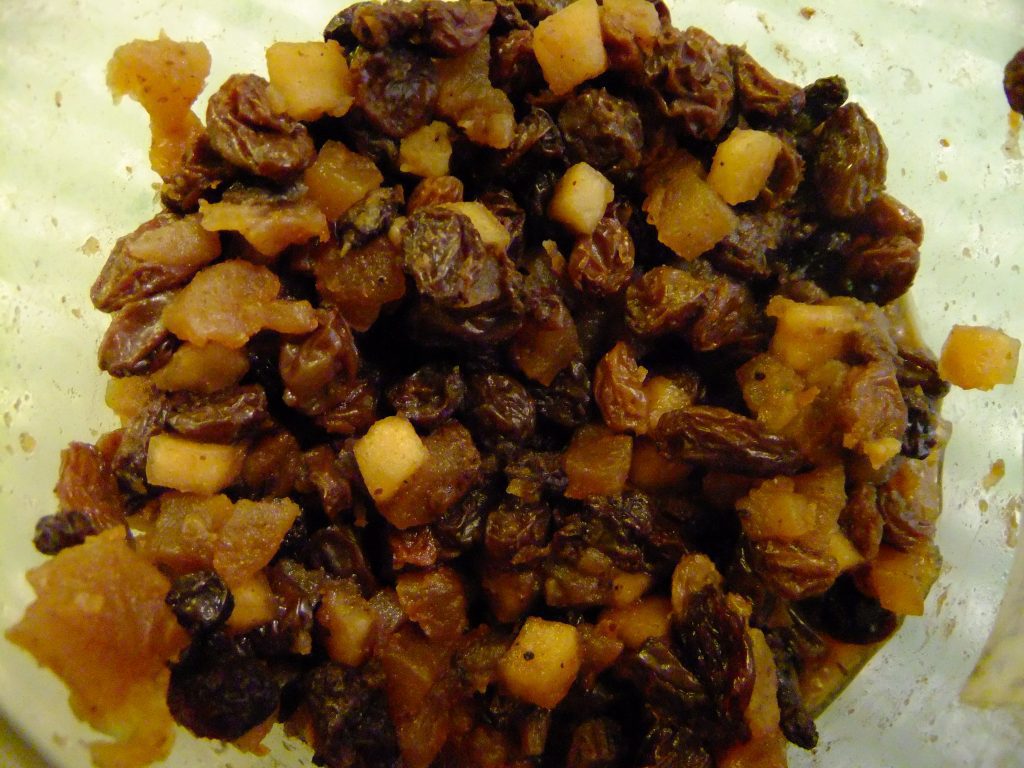 Don’t know about you but I’m really looking forward to Christmas and have started my baking already.  This recipe is the nicest mincemeat and doesn’t boil over during baking. It’s adapted from Rose Cousin’s recipe but I’ve adapted specially for the SC diet.  I’ve been making this for years because I love it.  Somehow high sugar gloopy mincemeat stopped doing it for me.  Store this mincemeat in a sterile glass jar.  If you intend to store for more than a week or two, allow the mincemeat to cool a little before adding a tablespoon of brandy/whiskey.   Mix well just before bottling.  You can sterilise jars by boiling the lids in water and heating the jars themselves to around 80C in the oven for 15 minutes.

1. Mix together all the ingredients in a large cooking pot with lid
2. Simmer very gently ½ hour
3. Taste and adjust the spice levels – I often like to add a bit more more cinnamon and allspice.

SCD pastry is hard to work so its best make 1 large pie base, pre-baked, then filled with your mincemeat and a lovely crumble topping before being baked again for a short time.   You can also treat the mincemeat just like a crumble – that is, put it in a pie dish or deep ovenproof plate, liberally sprinkle over the topping, bake until golden and serve with shipped additive-free coconut cream (from health shops).

If you don’t like coconut oil  but are sensitive to dairy then you can use clarified butter for the pastry.  Make this by very gently heating the butter, skim off the foam on the top and chill in a tall drinking glass or jug, then allow to solidify.  You will use only the solid part to make your pastry.  Discard the white liquid part underneath and rinse off any that’s clinging to the solid butter fat.  This white liquid is where the problematic milk proteins and disaccharide sugars are found.  Most people with IBD can tolerate SMALL amounts of normal butter but large amounts (found in pastry) can just be too much.

When baking your mince pies
Bake 20-25 mins at 185C fan/200C until golden
Put a baking try over the next rack in the oven so the pies cook evenly through.

Why this is (somewhat) better for you:
While I’d love to say this is a health-giving recipe I can’t really because its very high in natural sugars.  Although it doesn’t contain refined sugar it IS very high in natural sugars from the dried fruit.    BUT this mincemeat is free of low grade oils (like vegetable suet or sunflower oil) and refined sugar – both of which fire up inflammation in you.  If you choose organic dried fruit you avoid sulphur dioxide (preservative) that wreaks havoc on so many peoples digestion around Christmas time.  This preservative is converted by pathogenic bacteria in your bowel into irritating sulphites, which can cause gas, bloating and general unwellness in your gut.  Non-organic grapes (raisins etc.) are also very heavily contaminated with herbicides  that cause your gut to leak toxins and undigested food into your bloodstream.(increased intestinal permeability).  This process predisposes to and perpetuates inflammatory conditions from autoimmunity to mood issues and many more besides.   Pesticide residues in grapes damage the nerve supplying your gut and are linked to a range of neurological diseases (e.g. Parkinson’s, Motor Neurone).  Choosing food free of undesirable contaminants is a great step towards better health.  Here’s to a happy and a healthy Christmas.  I will certainly be enjoying healthier mince pies – probably far too many.