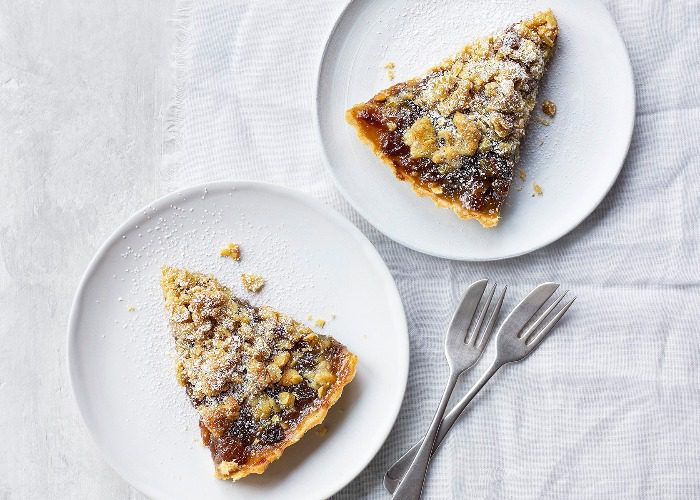 I love this crumble which I make often for apple crumble.  This quantity will top one 9 inch (23cm) diameter tart made in a pie dish or pyrex plate with possibly a little left over.  You want the topping to mostly cover the mincemeat so it doesn’t burn.  PS Sometimes I cheat on the topping, adding a few chopped hazelnuts or walnuts to the mix…

If this is for individual mince pies (rather than one big one) there’s no need to prebake the pastry base.

Why these are better for you:
Because these pies don’t contain refined sugar (if you use my mincemeat recipe) they don’t immediately start to drain your body of nutrients like magnesium (for mood) or selenium (needed for fat-burning thyroid hormones).  The nuts, although cooked (and therefore no longer containing much in the way of healthy oils!) do contain protein, which helps prevent the dips and peaks in blood sugar that can make you feel tired or narky.   Coconut oil is not damaged by baking so its still healthy in the finished product.  The medium chain triglycerides in coconut oil are useful for energy levels as they are used directly by your body instead of being stored as fat in your cells.  Virgin coconut oil rules!!   Ceylon cinnamon (but not normal cassia cinnamon sold as “cinnamon”) helps your body regulate blood sugar.  This helps reduce the risk of peaks and troughs in energy, brain function and mood throughout the day.  It also helps reduce your likelihood of developing diabetes possibly because it modifies your gut bacteria.  Yes, your gut bacteria control EVERY aspect of your health from blood pressure, heart health to mood and immune function – not just your digestive health.