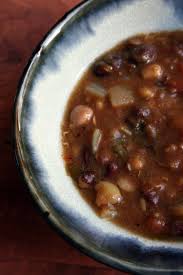 Harira is a delicious, rich Moroccan soup that’s really delicious.  With a green salad and maybe some gluten-free wholemeal bread, or some leftover cooked millet or brown rice stirred in it makes a main meal.  This looks like a complicated soup but it is easy to make, provided you keep a storecupboard of some basic spices and some beans and pulses.  Freeze it in single or multiple portions for TV dinners.  I so love this on a dark winter’s night or after coming in freezing from working in the garden.  Yum!!

If you are not used to eating beans and pulses then you might want to start with a small serving at a time, accompanied by some of your more “normal” (i.e.  starchy) foods.

Note:
All beans and pulses come equipped with protease inhibitors – these are substances designed to stop them being digested by our protein-digesting enzymes (proteases).  You can de-activate most of the protease inhibiters by soaking in cold water overnight  – this  helps inactivate the protease inhibitors.  Then you need to cook till tender, boiling hard for at least 10 minutes of the cooking time.  To make your beans/pulses ultra easy to digest, soak them at room temperature in clean cold water for a day or two until they start to sprout.  Then cook and use as normal.  If you never eat beans, then start with small portions and build up.  Beans contain soluble fibre which feeds good gut bacteria.  This can cause flatulence initially, which passes as you keep eating beans regularly.

Cook’s Handy Tip:
To reduce the cooking time of your beans/pulses soak a 7-10cm piece of Kombu  seaweed in hot water for a few minutes.  This removes the salt which could make the beans leathery as they cook.   Chop it up and add to your beans before/during cooking.  This also helps reduce the protease inhibitors and make the beans more digestible.  It reduces the amount of cooking time needed and won’t be tasted in the final soup.

Why this is good for you:
Beans and pulses are a great source of magnesium and potassium.  They are also rich in protein so a cupful, cooked, is enough protein to keep you satisfied for hours.  Thousands of scientific studies have been done on the health-boosting effects of spices.  Eating a variety of spices in your daily diet is a great way of helping your health, soothing your digestive system and getting clear, younger-looking skin.  spices also have an anti-inflammatory effect.

Seaweed, which you can use to speed up the cooking time of your beans (see tip),  is a rich source of iodine.  Iodine is needed for proper thyroid function and to keep your breasts or prostate healthy.  Most Irish people are deficient in iodine.  Iodine utilisation is blocked by fluoride and chlorine in our water, and by bromide which is used to “improve” white flour.  Irish people also eat less iodine-rich foods than ever because iodine is deficient in our soils.  Iodine is needed by your body to clear used-up sex hormones (oestrogens in particular including the toxic xeno-oestrogens from our environment).  This helps keep you free from breast and prostate tumours.  You can get rid of chlorine from your water by filtering it, or by boiling the water and leaving it to cool.  Fluoride can only be removed by a special fluoride filter like those available from www.simplywater.ie   You can reduce bromides by switching from wheaten flour to other, more nutritious wholegrains like rye (contains gluten), millet, brown rice, wholemeal spelt and buckwheat flours.