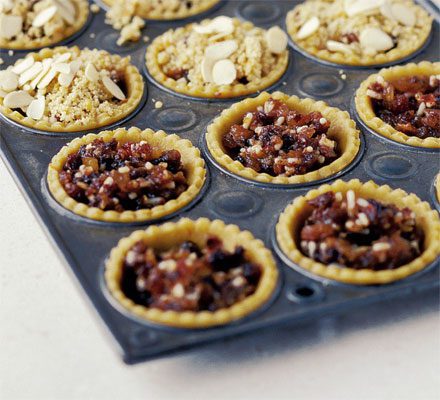 I got this idea for a crumble topping from Domini Kemp and adapted it to be less tooth-achingly sweet and gluten & dairy-free.  I love this decadent topping because it means you don’t have the time-consuming fiddly task of sticking pastry tops onto your mince pies (a real pain if you are making a large batch).  You can make this topping in advance and store in the fridge in an airtight jar for a week or two.

This also makes a gorgeous topping for any sort of fruit crumble if you mix it 60:40 with gluten-free oatflakes.

Why these are better for you:
Because these pies don’t contain refined sugar (if you use my mincemeat recipe) they don’t immediately start to drain your body of nutrients like magnesium (for mood) or selenium (needed for fat-burning thyroid hormones).  The nuts, although cooked (and therefore no longer containing much in the way of healthy oils!) do contain protein, which helps prevent the dips and peaks in blood sugar that can make you feel tired or narky.   Coconut oil is not damaged by baking so its still healthy in the finished product.  The medium chain triglycerides in coconut oil are useful for energy levels as they are used directly by your body instead of being stored as fat in your cells.  Virgin coconut oil rules!!   Ceylon cinnamon (but not normal cassia cinnamon sold as “cinnamon”) helps your body regulate blood sugar.  This helps reduce the risk of peaks and troughs in energy, brain function and mood throughout the day.  It also helps reduce likelihood of developing diabetes.