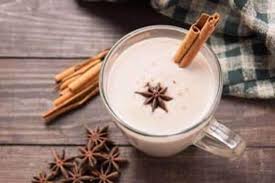 Do you love warm, spicy drinks?  I do and love the idea of chai but dont really like the sugar laden, condensed-milk builders tea type on offer in Indian restaurants.  Traditionally chai is made from tea, spices, sugar and condensed milk.  No exactly a vitality-boosting beverage.   I swapped the tea for naturally caffeine-free rooibosch tea which (unlike traditional tea) doesn’t blocknutrient absorption.  I sweeten it without sugar and use a non-dairy milk instead.   This tea aids detoxification due to the spices – quite a nice thing to do at this time of year if, like me, you ate (and drank) a bit more than was good for you during the holidays.

If you like your tea black, substitute water for the milk. I fyou like it made entirely on milk, feel free to do that but bear in mind almond milk can split when you boil it for a long time so coconut (or dairy) milk will give you a better consistency at the end.

Put the spices, water and tea into a saucepan, bring up to the boil, turn down and simmer, covered with a lid, for 1-15 minutes.  Add milk and sweetening to taste.

Posh Chai Blend to use again and again
I adapted this from a lovely Fortnum and Mason blend my nephew gave me.   But using South African Redbush (rooibosch) instead of normal tea enhances the health benefits.

6 heaped dessertspoons loose rooibosch tea
3 cinnamon sticks, broken up with your hands (make sure it’s the real Ceylon cinnamon, which looks like rolled cigars.  The cinnamon that looks like rough bark is only Cassia cinnamon, which doesn’t have the health benefits)
20 cloves
1 heaped teaspoon cracked coriander
20 cracked cardamom pods (bash whole coriander seeds and cardamom pods in a pestle and mortar for a minute)
1 level teaspoon ground ginger
2 star anise if you have them, broken up
1 teaspoon whole fennel seeds

Why this is good for you:
I love to make meals and drinks that contain spices.  Did you know that spices stimulate your body to make more antioxidants?  The spices themselves also help reduce numbers of disease-causing bacteria and increase numbers of friendly ones.  This is very relevant if you would like to maintain fantastic vitality and health as you go through life.  Spices help protect you from almost all chronic diseases.  The more different types you take in, the better.

Tannins in tea bond to nutrients in your meals and prevent you absorbing these precious nutrients.  Tea is also naturally high in aluminium, which is a toxic metal.  Green tea is interesting because if you make it the traditional way  you reduce the tannins a lot and aluminium significantly.  Green tea also contains epigallin catechate, a powerful protector against cancers, premature ageing and much more.  That’s why its OK to drink a couple of cups of green tea a day if you make it the traditional way.  To make green tea the traditional way pour boiling water on leaves, infuse 1 minute, throw away water then use fresh boiling water to brew the tea for 5 minutes.