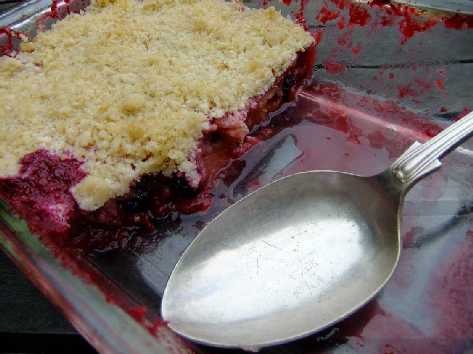 We continued to use our glut of cooking apples yesterday and ate this warm out of the oven.  You could use eating apples (such as French golden delicious) instead of cookers, in which case you don’t need to sweeten the apples at all.  If you have one, use a food processor to blitz the oats to make the crumble super-nice.  If you don’t have one, use gluten-free oat flour from the health shop (if you can eat gluten, standard oat flour is fine).  You can buy miniature food processors in Argos or department stores and save yourself time and effort.

1. Into a large saucepan put 1 tbs water and 20 drops of stevia (or the xylitol).  Put on a low heat to warm while you peel and slice the apples into the pan.  Stir around to make sure the stevia/xylitol is evenly distributed.  Cover and cook gently for around 10 minutes until the apples are softened.
2. Preheat oven to 170C (for fan oven, for non-fan oven, 185C)
3. Meanwhile make the crumble.  Blitz the porridge oats in the food processor or use the gluten-free oat flour.  Tip into a bowl with the ground almonds, a dessertspoon of xylitol/coconut sugar and the coconut oil.  Chop the coconut oil into the mix with a knife until it resembles breadcrumbs.   Taste for sweetness and, if you like, add another dessertspoon of xylitol/coconut sugar and mix around.
4. Grease a 20x30cm pyrex dish or roasting tin – a bit smaller or larger won’t matter much but this size gives you a nice depth of dessert.
5. Empty the cooked apples into the dish and flatten with a spoon.  Scatter the crumble evenly over the top.
6. Cook in the oven for around 30 minutes until slightly golden.
6. Serve on its own or with one of the following:
Dairy-free: natural coconut yoghurt (e.g. Abbot Kinneys or Coyo) sweetened with a few drops of vanilla extract
Dairy: a blob of Greek yoghurt

Why this is better for you:
Apples, especially cooking apples, are a rich source of a soluble fibre called pectin.  Soluble fibres like pectin feed beneficial bacteria in your gut.  Pectin binds to harmful toxins (e.g. mercury from dental fillings and tune, or arsenic from non-organic rice) in the bowel.  This makes them inert and aids their excretion.  Oats also contain soluble fibre.  Coconut oil is a rich source of medium chain triglycerides that help boost energy rather than being stored as body fat.  Unlike most other oils, coconut oil is stable at high temperatures and so is safe to use in cooking.  Using pure stevia (as herb) as your zero calorie sweetener for the apples is a 100% healthy form of sweetening.  Xylitol is made from birch tree sap and causes fewer spikes in blood sugar than “normal” sugar or honey.  I use xylitol for the crumble as stevia didn’t really seem to sweeten the topping enough when I experimented with it.  Sweeteners such as xylitol, honey, coconut sugar, molasses and maple syrup are still not actively good for you though, so sweetened foods like this dessert are best kept for occasional treats not everyday eating