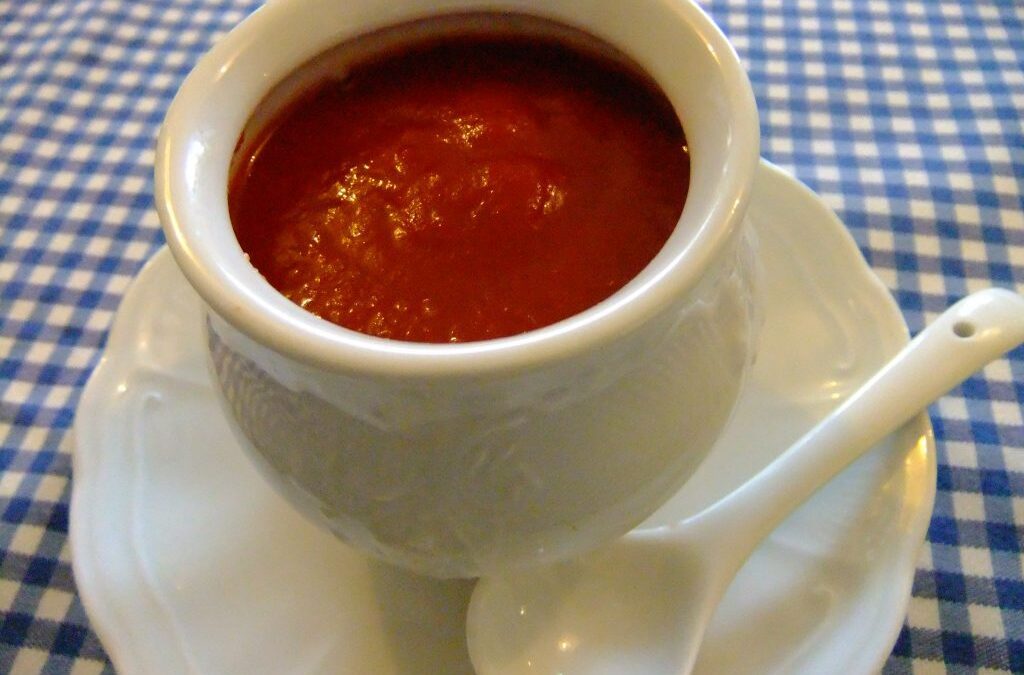 Anyone out there a ketchup-fiend?  It’s really easy to make this good-for-you version. I can guarantee it’s as delicious as the normal sugar-laden version as I’ve just tasted it.  The recipe comes from Dr Natasha Campbell-McBride’s book “Gut and Psychology Syndrome” that has helped so many children with autism to develop more normally, and live happier, healthier lives.   She in turn got the recipe from Elaine Gottshall, who wrote “The Specific Carbohydrate Diet” which has transformed the lives of many people with Crohn’s disease and colitis.  FOR AN INSTANT NO-COOK VERSION I SOMETIMES USE TOMATO PUREE INSTEAD OF JUICE/PASSATA (SEE NO 3 BELOW FOR INSTRUCTIONS)

2 cups tomato juice (or 1 1/2  cups passata or sieved tomatoes, which I used as its handier – it gives a grainier texture which I like)
1-3 tbs white vinegar
honey to taste
bay leaf (optional)
Pepper and Atlantic sea salt/Himalayan salt to taste

To sterilise jars and lids, boil in a saucepan with plenty of of water, with a lid on, for at least 15 minutes – don’t put hot food into cold jars, or cold food into hot jars, or they will shatter.  For other ways of sterilising jars try this site: http://britishfood.about.com/od/glossary/ht/sterilizingjars.htm

Why this is better for you:
Instead of being loaded with refined sugar or additives, this ketchup is sweetened with honey, which is less harmful for people with digestive difficulties.  People with damage to their small intestine (like children with autism, people with food intolerances or digestive disorders, or who take non-steroidal anti inflammatories or antibiotics) often cannot digest certain sugars. In particular, disaccharide sugars are a problem for these people, who do not make enough digestive enzymes in their intestines.   Eating these types of sugars, which occur in many foods (e.g. sugar, grains, potatoes) causes worsening of symptoms.  Unlike refined sugar (a disaccharide), honey contains only simple sugars, which are easy for the body to absorb, even without the aid of a healthy digestive system.  For this reason, this ketchup is allowed on the GAPS diet (see book above).  The GAPs diet has been used to help people with dyspraxia, ADHD, dyslexia, depression and even schizophrenia.